Kuzushi? What’s That and Why Do I Care? by Hal Zeidman 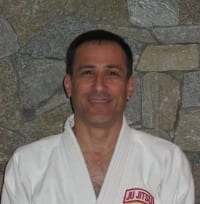 “I’m now going to teach you the secret of all martial arts” my sensei said to me. I was relieved; I’d just spent three times per week for the last six weeks learning and practicing my falls and at last I was going to learn “the good stuff.” My sensei then taught me happo no kuzushi (the eight forms of off balance). He very soberly informed me that “all attacks come from one of these directions” and that it was my ability to accept an attack from each of these directions that would determine my martial arts prowess. I’m sure he could tell how disappointed I was, since this was all Eastern philosophy mumbo jumbo to me and couldn’t possibly help me learn jujitsu. I just wanted to learn how to throw someone, and if not that, at least to learn how to break their arm, or something (As you can tell, I was bloodthirsty in those days!) He then told me to keep practicing my happo no kuzushi, and that as I achieved higher rank, it would mean more to me. I didn’t tell him this, but I knew he was wrong; there was no way happo no kuzushi could ever really help me learn jujitsu.

At its simplest level, kuzushi means off balance and involves the use of the other person’s motion. I believe that most jujitsuans understand this intellectually, yet they have not made this intellectual understanding an integral part of their jujitsu. They don’t practice it, instead when an attack comes, they are more interested in stopping the attack and countering than they are in accepting the attack and allowing the attacker to choose his own way to die, by virtue of his kuzushi determining the technique to be used while he is in motion.

Let’s start with a few basic concepts to help understand the basic principles in order to use your assailant’s kuzushi in all of your techniques:

The next question is “What do I practice?” The answer is equally simple. Practice happo no kuzushi, it’s the secret of all martial arts. Since this may not be a sufficiently descriptive answer, let me suggest the following steps:

Let me stress that this practice must be performed slowly. Speed must come naturally through practice and, if you hurry, you will never learn it. Will it take longer to learn this way? Absolutely. However, once you understand kuzushi and how to use it, your techniques will be vastly improved. As a result, in the long run you will be a much better martial artist than you otherwise would have been; and that is what studying ju jitsu is all about, anyway.

If you continue to practice the use of kuzushi, you will find that all of your techniques will become better. In a throw, it will feel as if the uki threw himself. You will start to wonder if they are throwing themselves just to make you look good or not hurt your feelings. When you punch someone, it will feel like their face attacked your fist (Yes, this works for all techniques, including atemi waza). This is why my sensei said that happo no kuzushi is the secret of all martial arts. So now, let’s go to Carnegie Hall the only way I know how to get there: practice, practice, practice.