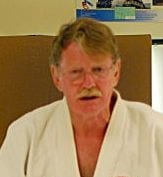 American Combat Judo was named by Bernard Cosneck originally for the Coast Guard during WWII and was specifically designed as a self-defense/offensive method for military personnel.  Focusing on rapid disposal of attackers, Combat Judo, unlike Law Enforcement techniques, does not attempt to control the attacker.  The Israeli Defense Forces’ Krav Maga system, which breaks down combat material to pragmatic actions, is probably closest to Combat Judo.

Combat Judo revives the more dangerous Jujitsu techniques that formed the basis for sport Judo.  It seeks to quickly defeat the opponent, allowing the option to finish with more drastic techniques, enabling the defender to focus on the next attacker.  Unlike sport Judo, no rules apply.

Cosneck, Fairbairn, and Applegate were the first Westerners to define the military aspect of Kano’s original Judo system (which borrowed heavily from Jujitsu) and use Combat Judo.  Several Allied Forces used the term, but Cosneck was one of the first to define it in his 1944 book, “Combat Judo.”  Ernie Cates, a 1950s Combat Judo instructor and Marine Judo champion, used a similar format, calling it “Judo with an attitude.”

Combat Judo survives in a number of styles that incorporate Judo’s original Atemi Waza with the more lethal aspects of Jujitsu.  Instructors in Krav Maga and Fort Bragg’s Delta Force have refined and specialize in the “Kill or Be Killed” aspects of Combat Judo.  Sadly, Special Forces Rangers now focus on Gracie Jujitsu, ending up grappling with single opponents while “number two” kicks in their skull.

British Officer Fairbairn also taught a form of Combat Jujitsu that he’d learned in China and which was similar to older Jujitsu styles from Kano’s Judo in which Atmei Waza was prominent, to the OSS.  He described this in his 1942 book, “Get Tough.”

Some Jujitsu instructors emphasize wrist manipulations, actions which provide examples of Jujitsu’s principles in body mechanics but have little pragmatic use in fast moving, reactive combat.  Essentially they are a training tool for understanding basics, hence more suited as control holds for law enforcement personnel.  Throws such Kubi Nage (Goshi Guruma), O Soto Gari, Harai Goshi, and Seoi Nage are useful in Combat Judo, but only when coupled with finishing techniques.

Combat Judo minimizes time required to learn more complicated contest Judo techniques such as Uchi Mata or Tai Otoshi, which offer opponents opportunity to hang on and drag one to the ground.  For example, contest-practical Maki Komi gets attacker and defender to the ground without disabling the attacker.

Most Kansetsu and Osaekomi Waza are impractical in Combat Judo because they rely on control and submission rather than disposal of an opponent.  In hand-to-hand combat, “number two” is always close by to kick you in the head!  Learning to escape from ground holds is critical, since many fights end up there if you do not dispose of your opponent quickly (the real objective of Combat Judo) while standing.

Strikes are useful.  The “Judo chop” to the neck was overused in movies in the 1950s and ‘60s to quickly and spectacularly enable the hero to dispose of antagonists.  This is impracticable in combat.  Although a hand-edge (Te Katana) Atemi to the throat would slow an opponent, correctly applied elbow and palm strikes are more effective.  Kicks to knees are useful, whereas knee strikes to the groin are overrated.

Combat Judo has improved since WWII, with styles such as Krav Maga far more pragmatic than what was taught in the old days.  Krav Maga has undergone many changes since its development.  Krav Maga’s philosophy basically is to eliminate the superfluous and use the simplest effective techniques for combat conditions, much like Combat Judo.

Combat Judo has many flavors, with instructors who favor their own specialties.  Techniques from various Ryu-ha were adopted by US Forces personnel who studied in Japan during the McArthur era.  Essentially all styles use identical principles, expand on the best, and call it Combat Judo.

Different styles, such as Spetsnaz doing Sambo or Israeli Defense Forces doing Krav Maga, can be just as effective as one’s own Combat Judo style.  Martial artists should have sufficient humility to accept that other styles and techniques actually may be more effective than their own.

“The Complete Kano Jiu-Jitsu,” 1935 edition, shows basics that we use today.  Books and videos however are no substitute for being on the mat with a knowledgeable instructor.

Combat Judo as originally practiced during and after WWII was different for the general army population from that done by Commandos, Paras, Rangers, or Brandenburgers.  The former learned basic defenses, a couple of throws (Seoi nage, Goshi Guruma, and O Soto Gari), some chokes, a headlock, and hand-edge strikes.  The specialist trained more and learned knife and gun defenses.

Mastery of a few techniques is better than familiarization with many.  A throw such as Kubi Nage is most effective to break through a boxer’s aggression, allowing for powerful elbow strikes after the opponent has panicked and hugged and pulled you to the ground.

Judo improves Combat style, providing a realistic but safe test of skill against an equally determined opponent.  More importantly it deals with the proper use of Kuzushi (balance-imbalance), something easily overlooked in Combat Judo training.

(Ben Bergwerf , USJA Professor of Jujitsu, is a founder of the USJA Jujitsu Program.  He holds USJA ranks of kudan in Jujitsu, rokudan in Judo, and yodan in Tae Kwondo.  Bergwerf Sensei teaches Combat Judo to cadets at The Citadel, the Military College of South Carolina, in Charleston.)